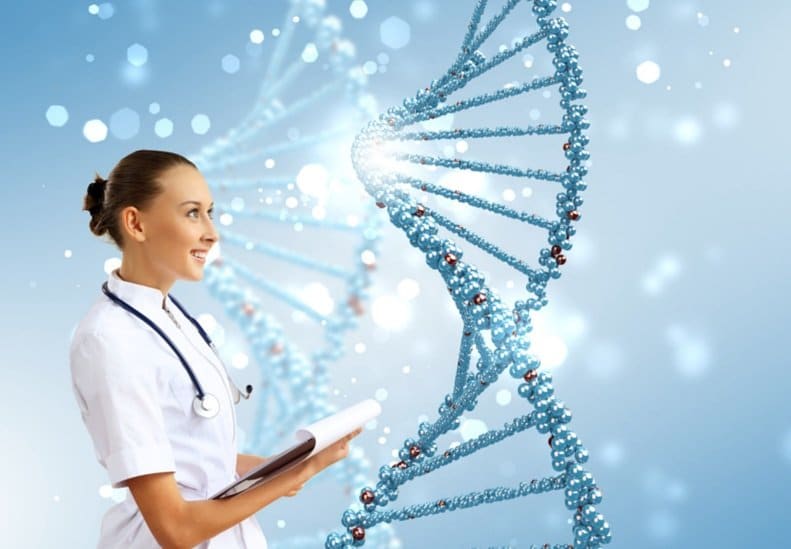 Epigenetics, as explained here, is an emerging field of study that has dispelled several notions related to nutrition and our health that modern medicine has assumed to be true. Below are what we believe to be the top three health myths that the field of epigenetics has prompted the medical community to reconsider. Biologically, epigenetic changes occur as signals from outside the cell pass into the cell nucleus and arrive at particular strands of DNA. The signals unwrap the protein barrier around each DNA strand, allowing it to be read or activated. In this way, a gene is expressed, whereas it was otherwise dormant or inactive. Once activated, the DNA works with RNA to synthesize specific proteins. This also works in the opposite direction; signals may inactivate or rewrap a DNA strand to shut it off. (Church)

In the article “Science of Epigenetics: How our Minds can Reprogram our Genes,” Konstantin Eriksen explains the long-held central dogma about our genes: “information in our cells flows only in one direction—from DNA to RNA to proteins.” This establishes the precedent that our DNA is the ultimate, unchangeable determinant of our health. This doctrine is further reinforced through the commonly used phrases “she must have won the genetic lottery,” “it’s in my genes,” and “he’s a natural born athlete.” Some individuals even have the tendency to blame their health on their genes, giving up on surviving cancer because it runs in the family, or rationalizing obesity with the view that genetics make it beyond their control. (Church) However, this could not be further from the truth.

While genetic inheritance and the diet and lifestyle of past generations do have an influence on how our genes are expressed, we are not held captive by these predispositions. Epigenetics research proves in most cases, that we have the ability to control gene expression; therefore, most of the time, we have the ability to control the expression of disease or health. It also proves that there is no simple connection between a single gene and a resulting disease. While genes can predispose one to certain illnesses, there is no “cancer” gene that with 100 percent certainty causes the disease. Disease is the result of a more complex set of interactions between genes and the epigenome.

Myth #2 – We are born with a clean genetic slate

Dr. Mercola describes the pervasiveness of this myth, stating that, “for many years, we were secure in our beliefs that, no matter what we did to damage ourselves in terms of poor lifestyle choices, it only affected us. Our children would be born with a genetic clean slate.” (Mercola) However, Pottenger’s cat study firmly established that both nutrient-deficient and a nutrient-rich diets impact the health outcomes of future generations. So we now understand that babies come into this world already affected by the lifestyle and health of prior generations, especially that of their parents just before conception and of the mother during pregnancy. Even as far back as grandparents and great-grandparents, the influence of nutrition and lifestyle choices persist for the fetus. (Pottenger) Many individuals, however, still act under the old paradigm, not realizing that their diet and lifestyle habits could be initiating epigenetic changes that will determine the future predisposition of their children, grandchildren, and great-grandchildren. The continuation of this misperception may be due, in part, to two other equally persistent myths, namely, the beliefs that our diets and lifestyles have little power over our biology, and therefore, our health. In other words, if we do not consider that food choices and environmental factors have an influence on our own genes and biology, then it would be nearly impossible to believe that these choices also affect future generations.

Myth #3 – Food, stress, our emotional state, and other environmental factors have little to no impact on our genetics and biology

Though modern medicine does not quite subscribe to the idea that food and nutrition can promote healing, prevent disease, and alter our epigenome, the medical community is beginning to broaden its acceptance of food as having a larger impact on our health than previously thought. This may be especially true in regard to herbs and certain medicinal foods such as mushroom extracts and detoxifying greens. A study of mice carrying the agouti gene, which determines different traits ranging from obesity and yellow fur to susceptibility to cancer and diabetes, found that the gene could effectively be turned off and its health consequences neutralized. This was accomplished through supplementation of the mother’s diet just before conception and through pregnancy with foods rich in methyl groups, such as onions, garlic, and beets. This resulted in no change to the DNA sequence of the mice, but it did trigger an epigenetic change by switching off the gene. (Watters)

Experiments within the past decade or so have just begun to establish the scientific relationship between attitudes, emotions, meditation, prayer, spirituality, and a patient’s overall health and longevity. The book, The Genie in our Genes: Epigenetic Medicine and the New Biology of Intention, cites research by Ronald Glaser and Janice Kiecolt-Glaser that explores the effect of stress and various emotional situations on the ability of the body to heal. In a particular study, the production of three specific proteins associated with the healing process was monitored in two different emotional situations—one positive and one negative—with the participants’ spouses. The study found that “the expression of these healing-linked proteins was depressed” in those participants who argued with their spouses. (Church) In couples that had a more severe disagreement, healing was slowed by 40 percent and a smaller amount of the restorative proteins were produced. In addition to slowing healing, these stressful situations and disagreements were found to suppress immune function. This is one way in which scientists are learning how our external environment and psychological state impact our internal biochemistry. (Kiecolt-Glaser et al.)

The Future of Epigenetics

While epigenetics research has presented valuable insights into our health, many questions regarding its implications remain. What more can epigenetics tell us about the interactions between DNA, RNA, and proteins in creating health or disease? How can we use epigenetics to achieve optimal health? And will it be possible to make recommendations for individuals to follow in order to achieve the necessary epigenetic changes to avoid certain diseases? These are only a few of many questions still waiting to be explored in the study of epigenetics and related fields.