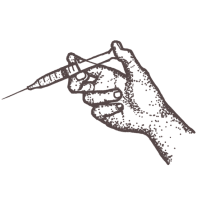 Last Tuesday, we learned about the safety, or lack thereof, of vaccines. Influenza season is approaching, at least according to the multitude of commercials and banner ads for “flu” vaccines that are prevalent everywhere, from the Internet to the roadside. Each year, World Health Organization scientists convene to predict which viruses out of hundreds of possible strains will be prevalent in the coming year. That information is used in creating annual flu shots.

Typically, three likely strains of influenza are selected, and vaccine production begins. The hope is that the viruses replicated for the vaccines will match whatever viruses affect the population that year. The makers of the vaccines promote their efficacy and we are all advised to get an annual “flu shot” – especially two “at-risk” groups: the very young and the elderly. But how effective are influenza vaccines, really?

In answering this question, it is important to understand the difference between efficacy and effectiveness. Efficacy refers to whether or not a vaccine can produce the expected result under ideal circumstances. Effectiveness measures the degree of the vaccine’s beneficial effect in the “real world.” Those numbers can vary widely, as shown in one study where efficacy was 73 percent, but effectiveness was only 15 percent.

What do the studies say?

Such a contrast was noted in a 2012 review (of 75 studies with about 300,000 observations) by the Cochrane Collaboration about influenza vaccines and children:

“There was a difference between vaccine efficacy and effectiveness, partly due to differing datasets, settings and viral circulation patterns. No safety comparisons could be carried out, emphasising the need for standardisation of methods and presentation of vaccine safety data in future studies. In specific cases, influenza vaccines were associated with serious harms such as narcolepsy and febrile convulsions. It was surprising to find only one study of inactivated vaccine in children under two years, given current recommendations to vaccinate healthy children from six months of age in the USA, Canada, parts of Europe and Australia. If immunisation in children is to be recommended as a public health policy, large-scale studies assessing important outcomes, and directly comparing vaccine types are urgently required. . . .

“ . . .The review showed that reliable evidence on influenza vaccines is thin but there is evidence of widespread manipulation of conclusions and spurious notoriety of the studies.”

Based upon this extensive review, it would appear that the actual effectiveness of the influenza vaccine is questionable, and makers of those vaccines may tend to overestimate their success rates.

Another review of studies by the Cochrane Collaboration, this one on vaccines for adults, showed a modest three percent benefit – but only when the vaccine matched the virus:

“In the relatively uncommon circumstance of vaccine matching the viral circulating strain and high circulation, 4% of unvaccinated people versus 1% of vaccinated people developed influenza symptoms. . . . The corresponding figures for poor vaccine matching were 2% and 1%. . . . These differences were not likely to be due to chance. Vaccination had a modest effect on time off work and had no effect on hospital admissions or complication rates. Inactivated vaccines caused local harms and an estimated 1.6 additional cases of Guillain-Barré Syndrome per million vaccinations.”

And a 2011 Lancet-published review of vaccine studies showed poor results for seniors as well:

“Influenza vaccines can provide moderate protection against virologically confirmed influenza, but such protection is greatly reduced or absent in some seasons. Evidence for protection in adults aged 65 years or older is lacking.”

But what about vaccines for health-care workers (HCWs) in long-term care facilities (LTCFs)?  Another report concluded, “No effect was shown for specific outcomes: laboratory-proven influenza, pneumonia and death from pneumonia. . . . The identified studies are at high risk of bias. Some HCWs remain unvaccinated because they do not perceive risk, doubt vaccine efficacy and are concerned about side effects. . . . We conclude there is no evidence that vaccinating HCWs prevents influenza in elderly residents in LTCFs.”

Some may argue that even a tiny percentage of effectiveness is better than none, and it is therefore better to get the vaccines. But the long-term risks of vaccines are still widely unknown. One important variable that plays a role in whether or not we get the flu is the strength of our immune system. Both the very young and the very old are considered to be “high-risk” groups for contracting influenza because they tend to have a relatively weak immune system. By improving our immune health through diet, exercise, and sleep habits, we greatly increase our chances of avoiding influenza and other diseases. And if we do get sick, a healthy immune system can lessen the effects of illness – without risk or unpleasant side effects – and with impressive effectiveness.

For more information, see “Influenza Vaccines: The Other Side of the Story” by Judd Handler in the Winter 2012-2013 Price-Pottenger Journal of Health and Healing.

Become a member today to receive access to this journal along with many other health and nutrition resources.

Influenza vaccination for healthcare workers who work with the elderly.

Efficacy and effectiveness of influenza vaccines: a systematic review and meta-analysis.