This excerpt from Dr. Weston A. Price’s book Nutrition and Physical Degeneration (published in 1939) was reprinted in Modern Nutrition, Volume 17, Number 6, June 1964.

It is possible to starve for minerals that are abundant in the foods eaten because they cannot be utilized without an adequate quantity of the fat-soluble activators.

This is illustrated in the following case. A minister in an industrial section of our city, during the period of severe depression, telephoned me stating that he had just been called to baptize a dying child. The child was not dead although almost constantly in convulsions. He thought the condition was probably nutritional and asked if he could bring the boy to the office immediately. The boy was badly emaciated, had rampant tooth decay, one leg in a cast, a very bad bronchial cough, and was in and out of convulsions in rapid succession. His convulsions had been getting worse progressively during the past eight months. His leg had been fractured two or three months previously while walking across the room when he fell in one of his convulsions. No healing had occurred. His diet consisted of white bread and skimmed milk. For mending the fracture the boy needed minerals, calcium, phosphorus and magnesium. His convulsions were due to a low calcium content of the blood. All of these were in the skimmed milk, for the butter-fat removed in the cream contains no calcium nor phosphorus, except traces.

The program provided was a change from the white flour bread to wheat gruel made from freshly ground wheat, and the substitution of whole milk for skimmed milk, with the addition of about a teaspoonful of a very high-vitamin butter with each feeding. He was given this meal that evening when he returned to his home. He slept all night without a convulsion. He was fed the same food five times the next day and did not have a convulsion. He proceeded rapidly to regain his health, without recurrence of his convulsions. In a month the fracture was united.

Six weeks later after this nutritional program was started the preacher called at the home to see how the boy was getting along. His mother stated that the boy was playing about the doorstep, but they could not see him. She called but received no answer. Presently they spied him where he had climbed up the downspout of the house to the second story. On being scolded by his mother, he ran and jumped over the garden fence, thus demonstrating that he was pretty much of a normal boy. This boy’s imperative need, that was not provided in white bread and skimmed milk, was the presence of the vitamins, and other activators that are in whole milk but not in skimmed milk, and in whole wheat, freshly ground, but not in white  flour. He was restored to health by the simple process of having Nature’s foods restored to him.

The necessity that the foods selected and used shall provide an adequate quantity of fat-soluble activators (including the known fat-soluble vitamins) is so imperative and is so important in preventing a part of our modem degeneration that I shall illustrate its need with another practical case.

A mother asked my assistance in planning the nutritional program for her boy. She reported that he was five years of age, and that he had been in bed in hospitals with rheumatic fever, arthritis and acute heart involvement most of the time for the past two and a half years. She had been told that the boy would not recover, so severe were the complications. As is so generally the case with rheumatic fever and endocarditis, this boy was suffering from severe tooth decay. In this connection, the American Heart Association has reported that 75 percent of heart involvements begin before ten years of age. My studies have shown that in about 95 percent of these cases there is active tooth decay.

The important change that I made in this boy’s dietary program was the removal of the white-flour products and in their stead the use of freshly cracked or ground wheat and oats used with whole milk to which was added a small amount of specially high-vitamin butter produced by cows pasturing on green wheat. Small doses of a high-vitamin, natural cod-liver oil were also added. At this time, the boy was so badly crippled with arthritis, in his swollen knees, wrists and rigid spine, that he was bedfast and cried by the hour. With the improvement in his nutrition which was the only change made in his care, his acute pain rapidly subsided, his appetite greatly improved, he slept soundly and gained rapidly in weight. 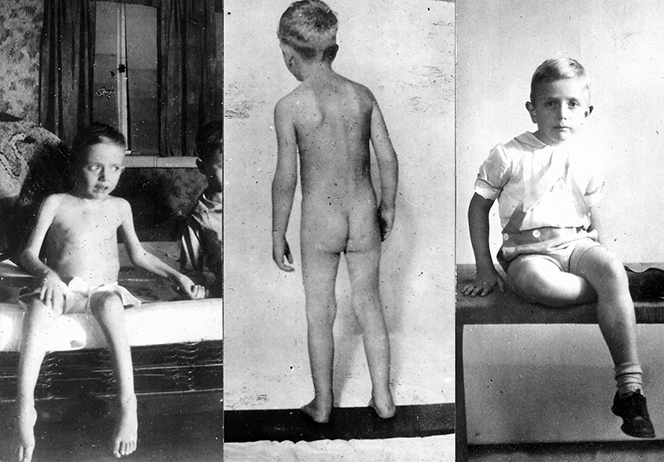 In the first view, to the left, in the group of three views, the boy is shown sitting on the edge of the bed at the end of the first month on this program. His joints were still badly swollen and his spine so rigid that he could not rotate his head farther than shown in the picture. In the center view he is shown about six months later, and in the third view, one year later. This occurred six years ago. As I write this, a letter has been received from the boy’s mother. She reports that he is taller and heavier than the average, has a good appetite and sleeps well.

In the newer light regarding the cause of rheumatic fever, or inflammatory rheumatism, there appear to be three underlying causes: a general lowered defense against infection in which the fat-soluble vitamins play a very important part; minute hemorrhages in joint tissues as part of the expression of deficiency of vitamin C, a scurvy symptom, and a source of infecting bacteria such as streptococcus. This could be provided by his infected teeth. These typical expressions of modern degeneration could not occur in most of the primitive races studied because of the high factor of safety in the minerals and vitamins of their nutrition.

It is important to emphasize the changes that were made in our modern dietary program to make this boy’s nutrition adequate for recovery. Sugars and sweets and white flour products were eliminated as far as possible. Freshly ground cereals were used for breads and gruels. Bone marrow was included in stews. Liver and a liberal supply of whole milk, green vegetables and fruits were provided. In addition, he was provided with a butter that was very high in vitamins having been produced by cows fed on a rapidly growing green grass. The best source for this is a pasturage of wheat and rye grass. Unless hay is carefully dried so as to retain its chlorophyll, which is a precursor of vitamin A, the cow cannot synthesize the fat-soluble vitamins.