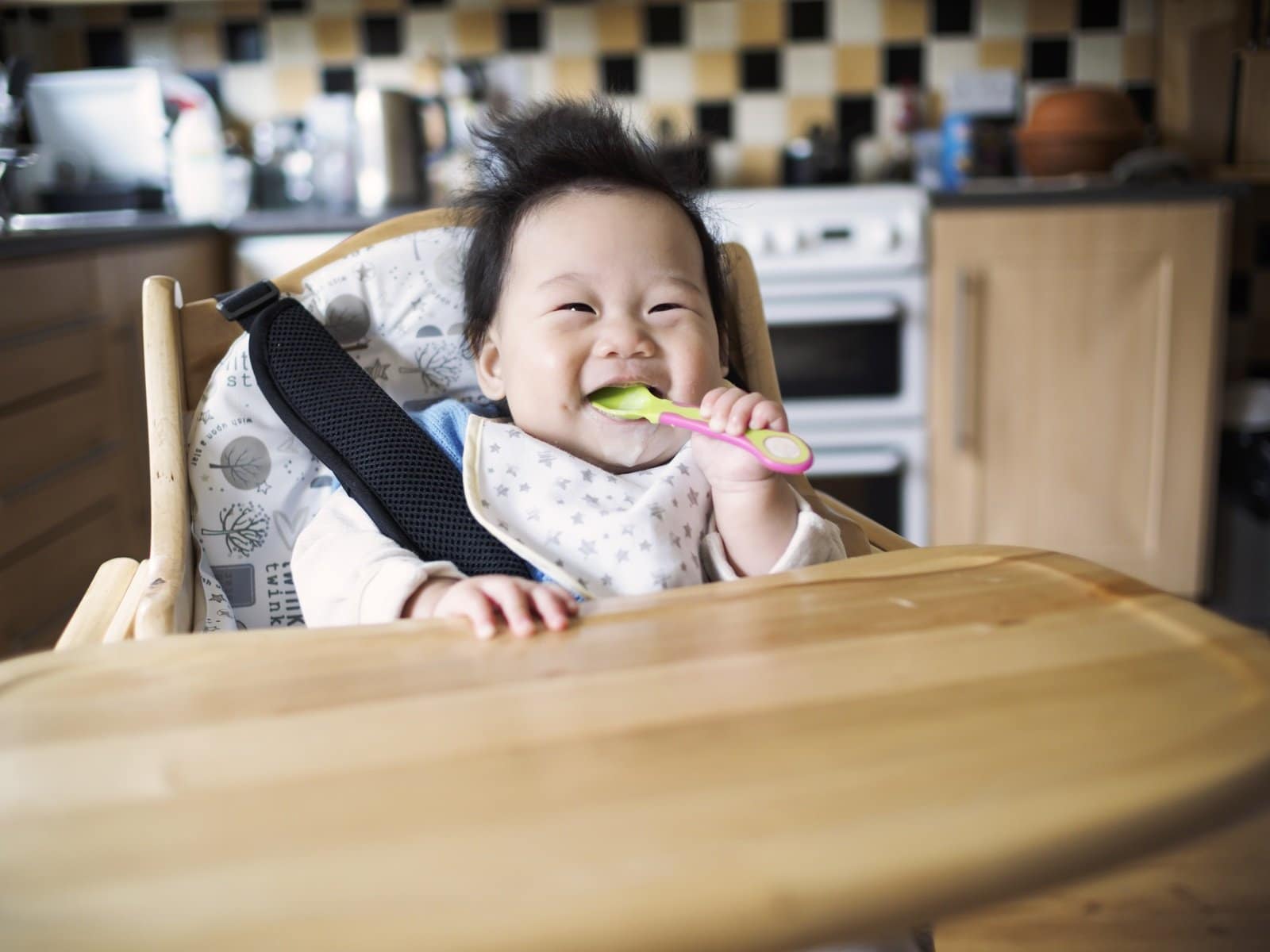 The World Health Organization, La Leche League International, and the American Academy of Pediatrics all recommend that mothers exclusively breastfeed their babies for approximately six months before introducing solid foods into their diets. By this age, children generally have developed the motor skills needed to safely ingest foods, such as sitting up unassisted, in addition to the ability to reach for food and grasp smaller objects.

Introducing baby to solid foods is a big milestone in her development. It is also the time when baby begins to develop her life-long relationship to food. With that understanding, many parents are leaving commercial baby food behind and opting instead to give baby more freedom around what and how to eat – a process known as baby-led weaning.

What is baby-led weaning?

Baby-led weaning does away with spoon-fed purées and instead allows baby to feed herself right from the start of the weaning process. Parents introduce age-appropriate foods that are soft-cooked, mashed, or cut into easily grasped pieces. They allow baby to explore holding these foods, putting them in her own mouth, and chewing. Parents do not put the food in baby’s mouth, so she has full control over what (and how much) she eats.

Despite the seemingly hands-off approach, parents are still involved. Besides preparing baby’s meal, they also may need to demonstrate the eating process for her, provide encouragement, and observe in order to learn her food preferences and needs. By following baby’s cues, parents respect her innate hunger mechanisms and avoid overfeeding.

In fact, baby-led weaning may be a natural extension of on-demand breastfeeding. Both rely on hunger cues from the infant and therefore allow him to control the feeding process. Parents who are concerned that baby may not be eating enough solid food can rest assured – breast milk will continue to be his main source of nutrients and calories for some time during the weaning process.

Keep in mind that baby’s stomach is only the size of his fist. Therefore, baby may only eat a tablespoon or two of food, especially at the beginning stages of weaning. However, his continuation of breastfeeding will ensure he has all the nutrients and energy he needs to explore his new food options.

And explore he will – baby-led weaning involves a lot of experimentation, which can admittedly get a bit messy. Expect squashing, throwing, dropping, and more. These behaviors all contribute to baby’s ability to understand and form a relationship to food.

What are the benefits of baby-led weaning?

Proponents of baby-led weaning report numerous benefits for babies and their parents:

How do I know if my baby is ready for solid foods?

Once you’ve decided that you’d like to use the baby-led weaning method with your child, it is important to assess her readiness to start the process. This is because successful baby-led weaning requires the development of certain motor and cognitive skills. These readiness skills include:

These skills are generally present in children around 6 months of age, though your child’s developmental timeline may differ slightly. Use your judgment (and perhaps consult your family physician) to determine when your child is ready to begin.

An additional factor to consider is whether you’ve been breastfeeding your baby (rather than bottle-feeding with formula). There is reason to believe that breastfed infants may be more accepting of baby-led weaning. An overview of baby-led weaning notes that “breastfed infants are generally exposed to a greater range of flavours through breastmilk than formula-fed infants, and this may make them more accepting of new foods and tastes when being weaned” (Reeves 2008, p. 109).

It is important to note that baby-led weaning is not appropriate for children with developmental disabilities or issues that make the readiness skills previously listed difficult to achieve.

Is baby-led weaning safe? Does it increase the risk of choking?

One frequent concern parents have about baby-led weaning is whether there is an increased risk of choking. Purées are often perceived as safer than small pieces of solid foods because many parents believe baby is less likely to choke on them.

However, Rapley and Murkett, in Baby-Led Weaning, explain that as long as the child is sitting upright and has control over the food in her mouth, choking is no more likely to happen with baby-led weaning than with spoon-feeding.

They go on to explain that gagging is often misinterpreted as choking in infants. The gagging reflex in babies is “triggered much farther forward on the tongue of a six-month-old baby” (p. 46), compared to the gagging reflex of an adult. This means that for babies, gagging occurs much more often and when the food is farther from the airway.

Rapley and Murkett conclude that the “gag reflex may well be a key part of babies’ learning how to manage food safely” (p. 46). They go on to state that children who have been spoon-fed may have more difficulty managing this gag reflex once they are finally allowed to handle food at around 8 to 9 months.

Even so, it is important to minimize any potentially dangerous situations by providing age-appropriate foods that baby can easily handle. Cooking vegetables and fruits well allows them to be easily mashed by your baby’s gums. You can also cut raw foods, such as apples, into large pieces that baby can grasp and gnaw on. In addition, observing baby while she eats will ensure she stays safe.

Only you can decide whether baby-led weaning is the correct approach for you and your baby. However, whether you elect to practice baby-led weaning, spoon-feeding, or a combination of the two, it is important to choose the right first foods for your child.

Have you used baby-led weaning with your children? What helpful hints can you share with parents new to the method? We’d love to hear about your experience in the comments below.